In November of 1994, Maurice Benayoun presented two VR pieces at the Artifices 3 biennial in Saint-Denis. 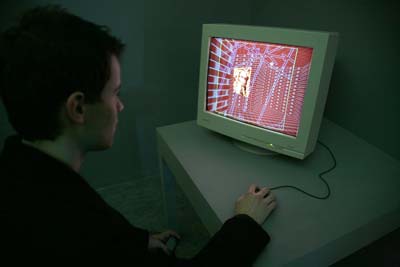 Moving through an environment enclosed by brick walls, the viewer goes on a virtual quest to seek out visual representations of Gods drawn from the history of art of different cultures.  As the viewer changes direction, he defines a new corridor, building up the virtual architecture as he goes.  According to how the viewer moves towards the rendition, it moves towards him, grows larger, or moves away. If the viewer moves too close, only the visual aspect of the God remains (the pixels).  However, the process of moving through and creating new corridors to view the Gods is part of an excavation of icons, hidden in the framework of the program.  By the viewer pursuing the image of God (or all of the different variations of God) he updates the collective knowledge of humanities’ variations of their creator, as well as building up a personal cumulative knowledge which comes from collecting the variations of God.

Is The Devil Curved?

With a similar architecture to Is God Flat, in Is the Devil Curved the viewer digs corridors through clouds in the sky, which are cut in real time as he moves.  As the viewer moves through the clouds, he begins to discover different shapes.  These shapes are round, organic, and paired with sensual sounds.  They react to the movement of the viewer, shifting to his touch, to his desire, almost in the manner of a devilish seduction.

“This is a diverted use of what we call ” artificial life “, which talks about life (the purpose of art) beyond a basic demonstration, by placing shapes in space. The visitor of this virtual world truly exists within this world, changing at his contact. The meaning itself is in this relation. The interactive realism lies in the transposition of laws, which rules the world in laws, which rules the meaning.” 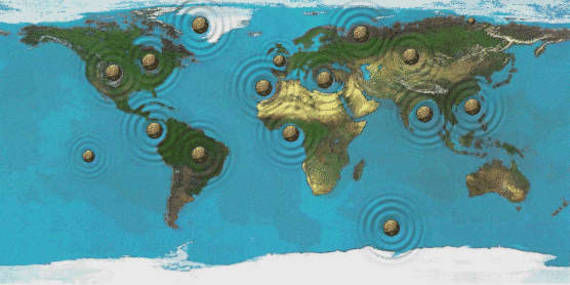 Contrary to the virtual interactivity in his first two projects, Benayoun created the response as a flat, interactive internet activity.  The viewer sees a java-built map of the world with stones and grains of sand.  He can drop the stones anywhere he pleases on the map, creating a rippling reaction of various sizes.  Benayoun answered his own question with the idea that we too are like these stones or grains of sand:  we drop in with force and create an effect around us, however eventually everything will still fall back as it should be.